Tanjaro River is located in Sulaymaniyah governorate North-East of Iraq stretching for 120kms to merge with Sirwan river and feed into Darbandikhan lake, this river has 245 imminent threats identified to locate inside its basin or next to it, making it undrinkable, nonswimmable and unfishable.
The threats were identified during a 2 months survey covering the entire stretch of the river from its source to its merging point with Sirwan river.

The survey was conducted by two field workers using car, boat and drone to capture the threats the river is facing all along the river stretch and used a criterion adapted from BirdLife International (2006) for assessing threats to areas of conservation concern.
Data collection and analysis provided a clear view on the river’s situation that led to the creation of action plans that are of high importance and immediately required implementations.

The action plans focus on solving these problems that are arranged into 12 categories, out of these 12, climate change with pollution and energy production and mining are three of the most severe, large and existing threats that need most focus and solving in a strategic way ranging from elimination of municipal sewage, wastewater and garbage pollution that enter the water resources directly, restoration of riparian and in-stream habitats and functions that were damaged by gravel mining and other energy production and mining threats, well assessed country-level climate adaptation needs, collecting needed Climate Data/information and outreach projects to combat climate change consequences.

At the end of the Tanjero River Threat Assessment Report, our team conducted 6 trips to 6 spots on Tanjero River where threats are imminent and visible accompanied by 50 participants who were volunteers, environmentalists, university students and activists. The participants had a glimpse at what is happening to the river and were trained on how to do threat assessment and also the importance of clean up campaigns.
The final phase of the project was the creation of a podcast called Enki Talk which had 6 episodes with 6 guests were environmental issues in Tanjero area, Kurdistan and Iraq were discussed.
​
This activity is under Civil Society project, Implemented by Waterkeepers Iraq Kurdistan, in partnership with Humat Dijlah, in coordination with the Department of Environment of Sulaimaniyah, funded by the European Union and Implemented by the United Nations Development Programme.
Waterkeepers Iraq is glad to announce the finishing of its threat assessment and survey on Tanjero River.
After nearly 2 months of field work, our threat assessment report is ready and you can now look it up with the map on our website.
To make this happen, our team went on 16 trips along the Tanjero River, from Hanarani Sarw Village until reaching the meeting point of Tanjero and Sirwan River in Darbandikhan Lake. Locating and defining threats generally on the environment and specifically on Tanjero River.
We hope this threat assessment find its way to the right places and hopefully see actions towards making better situations of the river.

This activity is under Civil Society project, Implemented by Waterkeepers Iraq Kurdistan, in partnership with Humat Dijlah, in coordination with the Department of Environment of Sulaimaniyah, Funded by the European Union and Implemented by the United Nations Development Programme.

Interactive map of the 245 threats found on the river 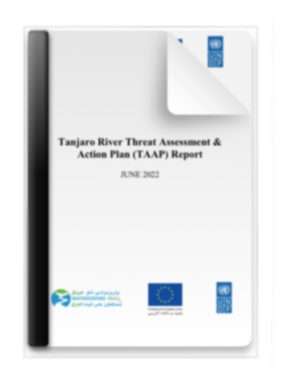 To read more about Water Contaminations, you can visit here: https://www.consumernotice.org/environmental/water-contamination/