​All civilizations around the world depend on the health and cleanliness of water sources for survival, in Mesopotamia the primary water sources are the Tigress River and Euphrates Rivers. Throughout the generations villages have adapted their way of life according to the movements of the rivers. Traditional methods of leather craft, housing, fishing, agriculture and transportation change according to the availability and cleanliness of water.  lifestyles in order to make an income for their families in larger cities. There is little value placed on traditional lifestyles in city environments and unfortunately many face discrimination due to their socio economic status and perceived ignorance. This has created a disconnection between communities and their natural environment, increasing stress on families and resulting in poor social connections and psychological ill-health. This project intended to reconnect the older and younger generations of villagers along the Tigress river, documenting traditional lifestyles and connections to the river. It intended to restore connections to nature through interviews and photography exhibitions and poetry as well as destigmatize villages and traditional lifestyles and also reaching out to public Media stations. The photographs and poems will be curated in an exhibition at the completion of the project and photography book will be created at the end of this project to make the exhibition more sustainable and accessible locally and internationally. 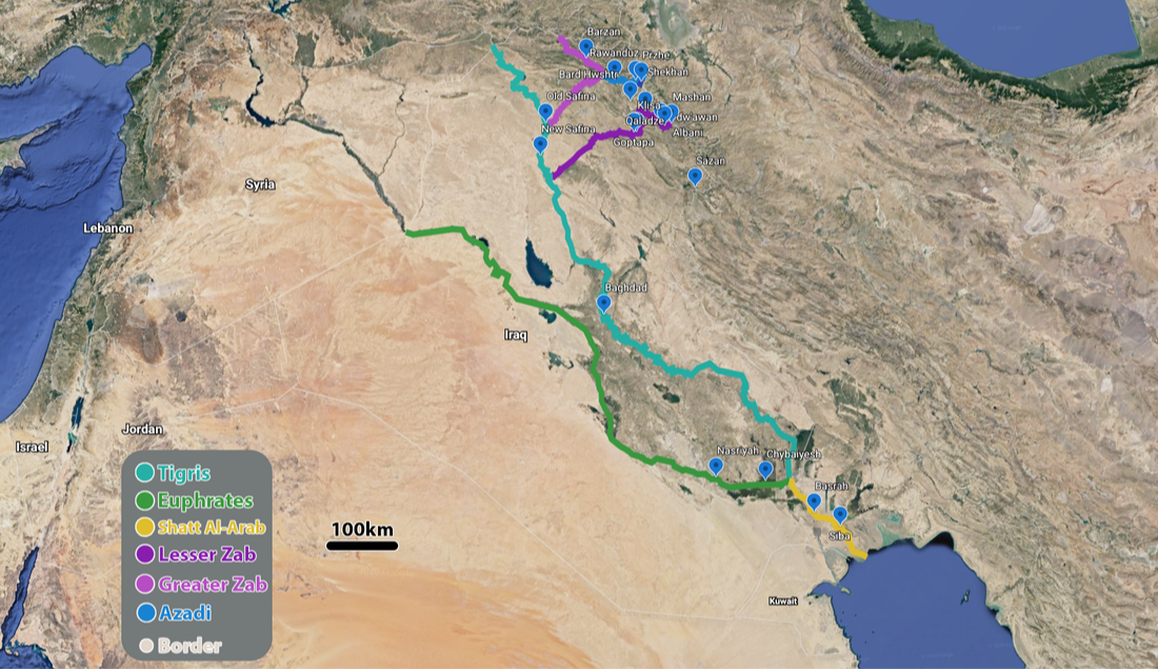 ​A team from Waterkeepers Iraq and Humat Dijlah followed the Tigris River from 14th August, 2020 to October 20th, 2020. The team hiked, boated, kayaked and drove covering more than 1000 kilometers to access as much of the river as possible.  They followed the Tigris river and its tributaries from mountains in the Kurdistan region of Iraq to the Marshlands in Chibayish and Basra at the river’s entry point to the sea. They travelled to cities along the river which rely on the cleanliness of the water for their survival. Along the journey they interviewed people from all backgrounds whose lives are interconnected with the river and who have survived years of unrest, war and trauma. The poetry is inspired by these interviews, it uses both the interviews and the personal experiences of the team to challenge, inspire and spark the readers’ imagination. Throughout the generation’s villages have adapted their way of life according to the movements of the rivers. Traditional methods of leather craft, housing, fishing, agriculture and transportation change according to the availability and cleanliness of water.
Poisoning, damming and pollution of the rivers has disconnected communities and with their natural environment, increasing stress on families and resulting in poor social connections and psychological ill-health. Destruction of the water systems, ecological balance, excessive sewage as well as unsustainable and unethical oil production have fundamentally changed how communities interact with their environments.
Rivers have no boundaries or limits, rivers do not discriminate between religions, ethnicities or classes they do not differentiate between humans and nature.
Rivers need to flow freely to support the ecosystems that rely on them, without them there will be no suitable environment to live in, humanity relies on fresh water and rivers for its survival. When we poison our rivers, we destroy the future for all of us, both for humans and for nature.
Hopefully this project will encourage everyone to take immediate actions to preserve and protect the rivers which are our lifeblood.

The exhibition at Vim Foundation from 13/11/2020 to 23/11/2020 showcased photography and poems from the project “Reconnecting with Out Lifeblood”.
The photos and poetry told layers of stories about the livelihood of people living along the Tigris River and it’s tributaries from
from North of Iraq to the South. The photos told stories of lives intricately connected with the rivers and Iraqi marshes and explored some of the destruction from pollution, sewage, overfishing and unsustainable oil production.
The opening was a successful day with strict measures to avoid any possible spread of COVID-19, and was well attended.
We hope that the exhibition inspired people to look differently at the rivers in Iraq as well as the people and ecosystems who rely on them for survival. We hope that by looking at them differently more individuals and organizations will take steps to protect the rivers such as: disposing of waste responsibly, refraining from over fishing and advocating with governments to cease the building of dams along the rivers.
Special thanks to, Vim Foundation, Metrography Agency, Humat al-Dijlah and Spotlight for making this exhibition possible.
Spotlight Iraq is a project of the Goethe-institut and supported by the German Federal Foreign Office.
​Waterkeepers Iraq Kurdistan team.