New Update in August '16. The spill has reached the rivers edge.  The local government attempted to dig a second trench to intercept the spill but this appeared to be unsuccessful and has had no impact on run-off and infiltration of toxins from the spill into the soil, river and groundwater. 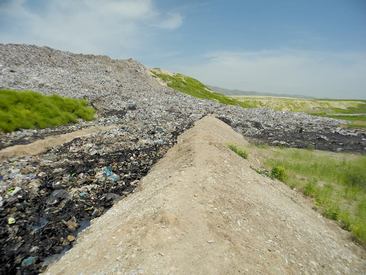 For decades now the city of Sulaimani in Iraqi Kurdistan has been dumping its waste at a site in an industrial area southeast of the city very close to the Tanjero River known as the Tanjero Dump.  Most of this waste is municipal garbage from the city residents but industries and businesses also use the site.  As with most waste facilities in the country, this is simply an open air dump, not a sanitary landfill and it has been polluting the local environment for years.

Waste oils and most likely other toxic materials have been dumped here as well, which has reportedly contaminated groundwater in the area.  In the winter of 2016, the waste oil, which is mixed with rainwater and garbage, reached a critical level and begun to flow out of the dump towards the Tanjero River.  An effort to intercept this oily mess by digging a deep trench on the south side of the dump did not succeed and by late February of this year, the trench was starting to fill and the waste oil had broken past it and entered the farm fields between the dump and the river.

Since February, this moving oily mass has traveled over 140 meters and based on measurements taken by Waterkeepers Iraq in early June, 2016 has traveled an average 1.3 meters per day.  This rate is likely increasing with the warmer temperatures of summer.  Waterkeepers Iraq predicts that this moving toxic catastrophe will reach the Tanjero River in 3 to 4 months if efforts aren’t made to stop it.  It’s already polluting the river but if the mass reaches the river, it will be even harder to clean up and could increase the impact of this toxic spill and the cost to clean it up.  There are communities and farmlands downstream that depend upon the waters of the river. Darbandikhan Lake and Dam could likely both be impacted by this spill as well.

It is unclear whether dumping of waste oil is continuing to take place at the site and there appears to be no action to address this moving toxic mess since attempting to stop it by digging the trench this past winter. Nor do there appear to be any efforts at finding alternative, recycling methods that would stop waste oils and other toxics from being dumped in the first place.

Learn more about this spill and its impacts on local people from a recent film developed for the Waterkeepers Iraq Environmental Education Channel.
​
Immediate action is needed and we want to call on the UN and international environmental organizations to start raising this issue with the Baghdad Government, the Kurdistan Regional Government, and local authorities in Sulaimani.  This is an issue that we ignore at our peril. We also call on the citizens and local groups of Sulaimani and all the downstream communities along the Tanjero to become more vocal about demanding their rights to a clean and healthy river and community.

We urge citizens to make their voice heard on this issue and ask for the Sulaimani City Dump spill to be properly cleaned up and a better solution found for handling all our municipal and industrial wastes.  Send this message by contacting the following: 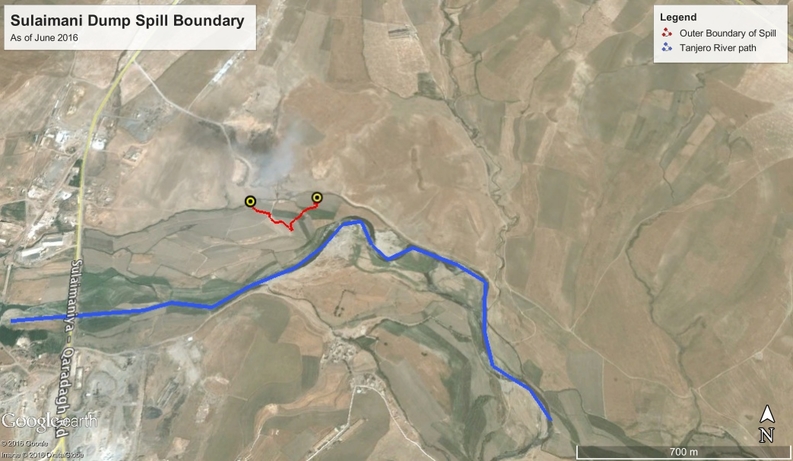 Note: The red line indicates the outer edge of the spills as of early June